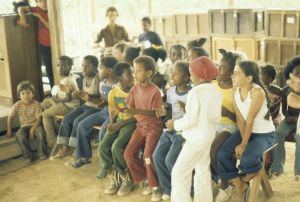 By Sikivu Hutchinson (from White Nights, Black Paradise) The night watchwoman does not drink coffee. She never pees. Never leaves her post for a smoke break, a phone call, a fart in the subzero weather that’s kicked in the teeth of Dover AFB. She sits behind the air force base security console with gloved fingers, eyes darting from screen to screen, scanning for shadows, her desk stacked with packages stamped classified. Our arrival here has been a sensation. A few reporters descended in earnest. A few locals banded together to gawk and complain. The locals say the cold, the snow, is the worst it’s been in a while. That it portends something bad, that it’s a fitting greeting to us. When we were over there we secretly dreamt of a white Christmas. Even though it was forbidden fruit; low-hanging, sickly sweet, a safe place to hide in when the monsters came. Because we didn’t really celebrate Christmas the natives accused us of being Jehovah’s Witnesses. That ratty charade of a million cultists worldwide. Maybe the watchwoman is one of them. Trundling door to door like a wind-up toy with a Santa Claus sack of end-of-the-world pamphlets. When we begged for money in the town square the native children gave us garlands because they felt sorry for us. The white ones and the mixed ones in our group were to be in the forefront. We black ones just looked like all the other children running around, blending in with everyone else. The best window dressing they tell us. The watchwoman’s shift begins at midnight. She takes the bus back home at 8:30, passing the morning shuttle crammed with airmen off to training. She watched us on the banged-up TV set that only has three clear channels, getting her children dressed as the heater rumbles on, shielding their eyes from our bloated bodies while she tries to turn to Woody Woodpecker, to Bugs Bunny, to ordinariness and animals bashing their brains in. We don’t blame her. It’s a mother’s instinct to protect their young from bad things. We have identical lines on our necks. Mine from birth, hers from age, the slow creep into middle age; even at thirty-five she was still young but spiraling downward, an older woman having a baby for the first time thousands of miles from home. She changed my diaper right on the folding chair next to her in the pavilion. She sits in the front row waiting for the performance to begin. A good seat means a plate of hot food at the end of the meeting. It means recognition that she is dedicated. It signals to the leadership that she is serious. The nurses delivered me by C-section, the first one in the settlement. They cleaned me then plopped me on her chest, unable to pry open my clenched pink fingers. She wears my bloody fist print with pride all week, a tiny Black Power salute embedded under her clavicle. She is exempt from participating in the drills because of the C-section. At night we lie together cheek to cheek, listening to the rain blow through as our people rip and run, rehearse and fortify. The takeover could happen anytime. It will come in a flood of white parachutes, blazing military guns, contaminated water. Best to sit on the edge of preparedness than to be caught off guard, slack, flabby, complacent. Her voice is too hoarse to sing me a lullaby. Her body too heavy from the painkillers. Her brain too tired from the crashing chaos. But secretly, really, she is not that kind of mommy. So she holds me to her like a fine cut piece of steel. Does the watchwoman know this as she walks through the morgue inspecting the surnames, lingering at familiar ones, the long and winding road of church families, generations’ deep, the crazy quilt of birthdates stretching back to Indiana, Texas, Chicago, Tennessee, Alabama, Mississippi. She eats her dinner alone in the cafeteria, the transistor radio by the cash register burbling about hit squads, spies, Negro fanatics that go bump in the night. Be careful down there, the cashier says, banging a roll of nickels into his drawer. Them spooks down there are liable to snatch you up. Does the watchwoman know that when mommy spoke there was no trace of Amarillo about her? That her accent was clean, discreet, with no upturn at the ends of a question, no licorice sucking drawl like that of her grandparents who’d followed Father to California after Newark burned in ’67, their dry cleaning business destroyed. The same thing was happening in San Fran before we left. The same plague of government lies and cover-ups. The same developers thick and ripe as fresh maggots, spewing out eviction notices to the black people. To own land and be Negro was criminal. But this is what the watchwoman doesn’t know, eyeing the mountain of boxes stacked to the ceiling in drill formation rows, marinating in snap judgment. She has worked at the base for three years with no benefits, no sick leave, no retirement or overtime, playing the part of the good night soldier to her sundry charges, the ever changing cast of inmates in the morgue; blessed by God, she’s told, to have a stable job in her neighborhood when so many have been laid off, are rootless and living hand to mouth due to laws that spit on the working man. After a week the press has left, bored by the absence of revelation, fireworks, by the scratching and clawing of next of kin bellowing for revenge. When they begin the grind of identifying remains who will come forward to claim us, mommy and me, lying intertwined, as though I’d never left her to venture on my own into the outside world?